You might have already tried using triggers to send auto-replies to buyers and had nothing happen. Don't worry—using ChannelReply and Zendesk as an eBay, Walmart and Amazon autoresponder just takes a little extra setup. Plus, it will even count toward Amazon’s 24-hour response SLA!

Don't have a ChannelReply account yet? Try it free!

How Timing Works in Our eBay/Walmart/Amazon Autoresponder

This autoresponder system generates messages once every half-hour. It could be up to 35 minutes before an auto-reply appears on a Zendesk ticket, so keep calm and carry on if nothing happens right away.

Using Zendesk as a Shopify Autoresponder

If you use our Zendesk-Shopify integration, you can also use this system as a Shopify autoresponder. However, you don't have to. Zendesk's standard triggers work for Shopify with no special setup needed.

These instructions are written on the assumption that you will not use the eBay/Walmart/Amazon autoresponder system for Shopify. Following them will not disrupt any Shopify autoresponders you have already set up.

If you want to use this system for Shopify, then all you need to do is enter your Shopify tag anywhere we say to enter your eBay, Amazon or Walmart tags. Shopify will work the same way as any of those marketplaces.

If you haven’t changed or deactivated Zendesk’s default triggers, be warned that some might go off at the same time as an Amazon, Walmart or eBay autoresponder. This could result in a barrage of error notifications, or worse, your customers seeing multiple auto-replies.

Follow the steps below to prevent double messaging from Zendesk’s default triggers. If you’ve built custom triggers/automations that work as autoresponders, take the same steps with those to prevent them from firing as well. 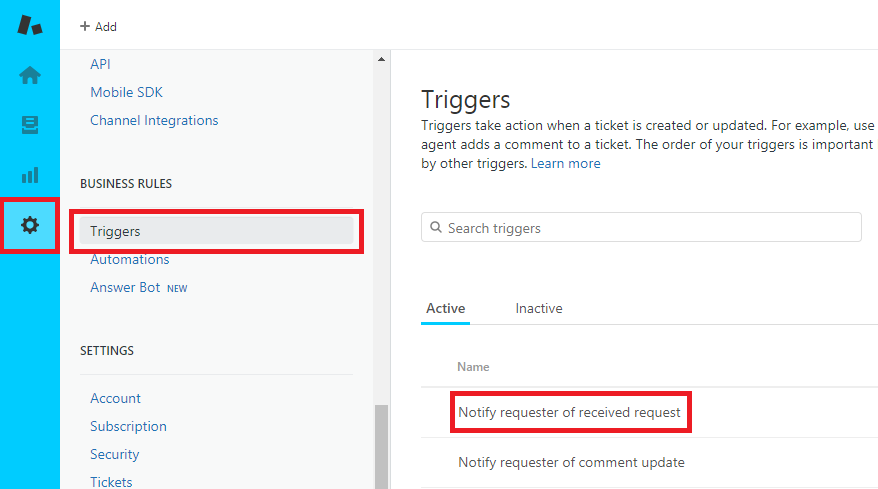 Edit the trigger and add the following ALL condition:

Tags | Contains none of the following | (Your ChannelReply Amazon, eBay and Walmart tags)

Here’s an example for someone with two Amazon accounts, one tagged with “AmazonNA” and the other “AmazonEU”:

This stops Zendesk’s default auto-reply from trying to answer marketplace messages. It will still work for normal emails. 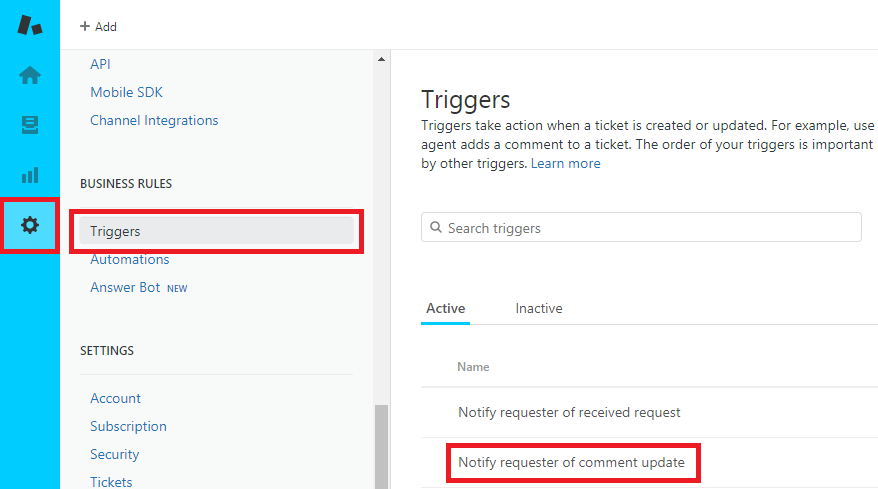 Under “Meet ALL of the following conditions,” add the same condition:

Tags | Contains none of the following | (Your ChannelReply Amazon, eBay and Walmart tags)

This will make sure your customers never get two copies of your responses.

Name the target “ChannelReply Autoresponder.” Then enter the following data:

In the “Basic Authentication” fields, enter your ChannelReply username and password.

Note that these fields are case sensitive. One capital letter in the wrong place can break everything!

Here is an example of a correctly configured target: 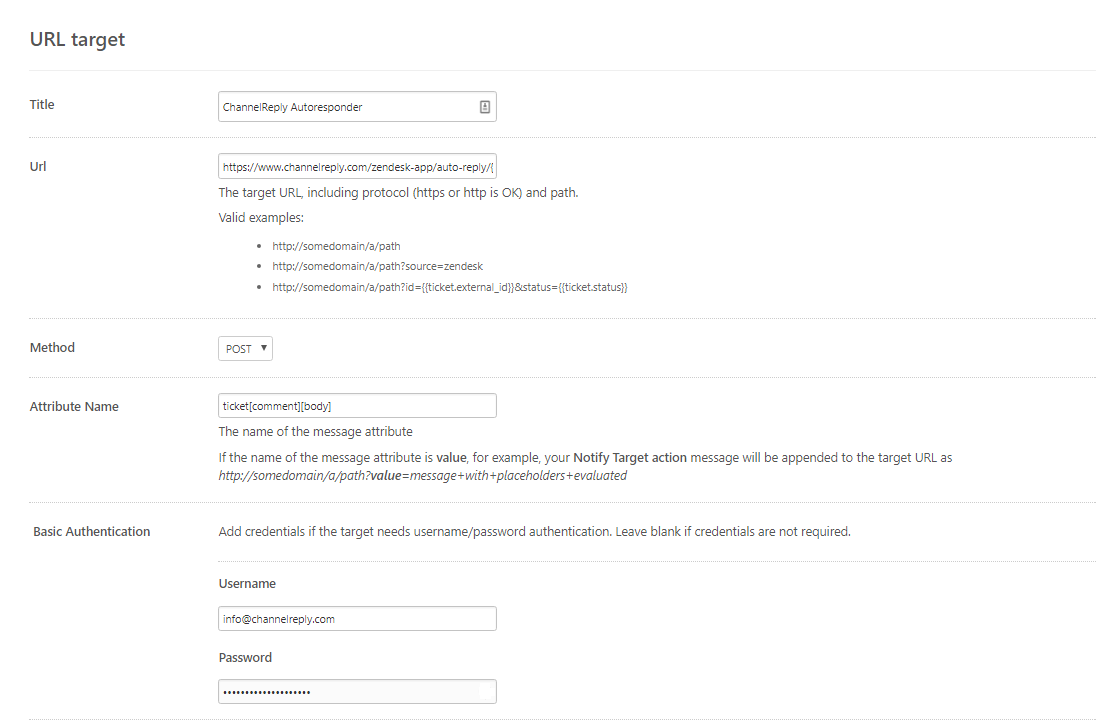 You can test and create your new target with the options at the bottom right.

Now you can design your autoresponder!

It’s up to you which of your marketplace accounts your autoresponder will answer. It all depends on which ChannelReply tags you enter when following the steps below.

You can make as many autoresponders as you want. See the “Tips” section later in this article for advice on creating more after the first is complete.

How to Set Up an eBay, Walmart and/or Amazon Autoresponder

Next, scroll down and add the following action:

In the “Message” field, enter the automatic response you would like your customers to receive. Be careful not to include any links, as most links are forbidden by marketplace policies. 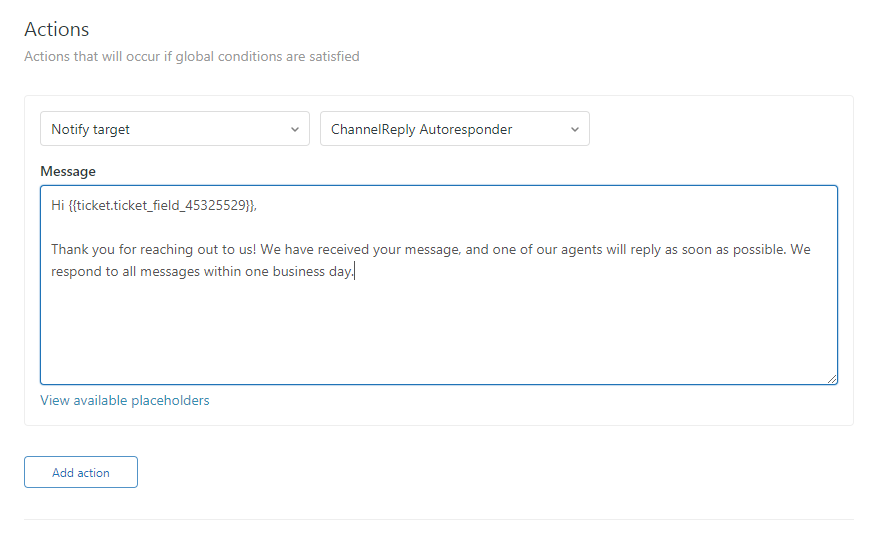 Want to auto-personalize your autoreplies? You can! Use our custom fields as Zendesk placeholders to instantly enter details like the item the buyer ordered, the status of their order and more.

Option A: Auto-Reply Once Per Ticket

Finally, at the bottom of the page, click “Create.”

Option B: Auto-Reply to Every Message

The configuration for option B depends on your Zendesk settings. Check whether both of the following are true: 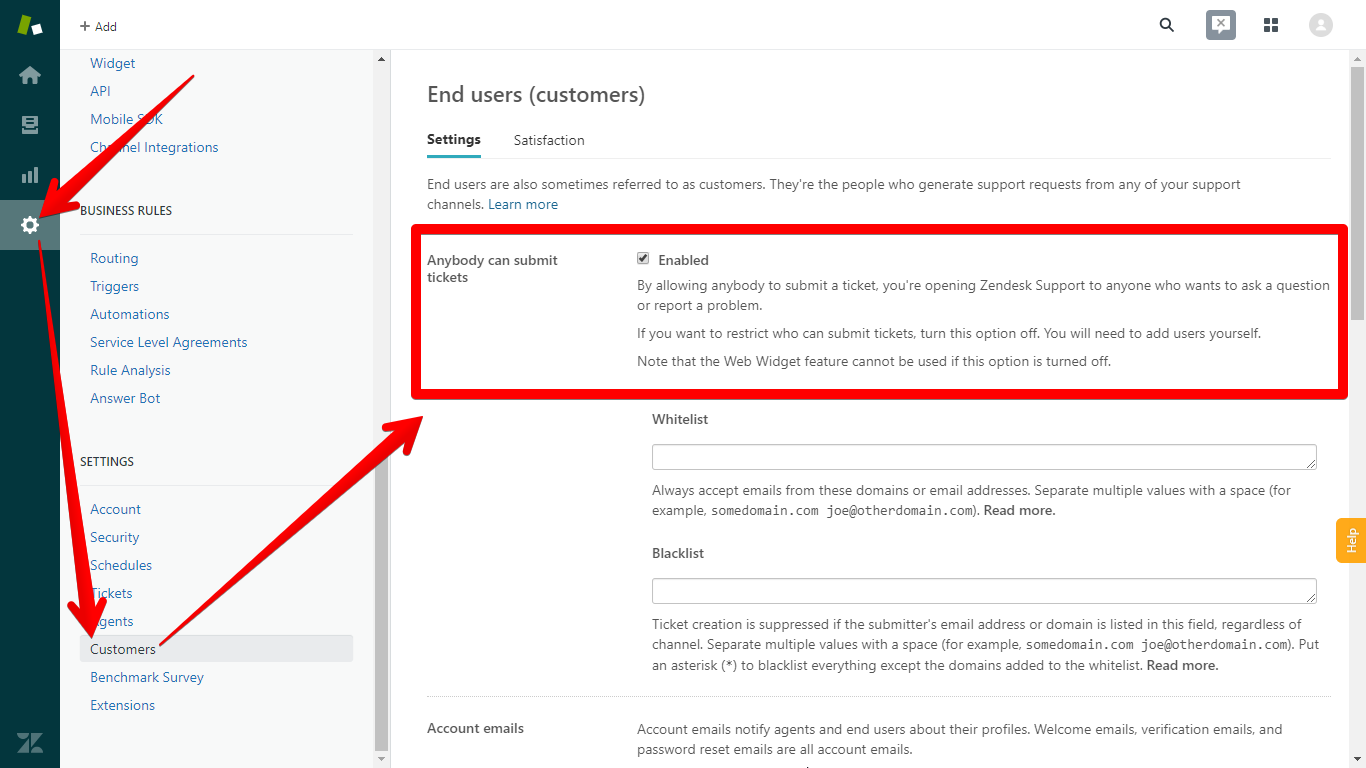 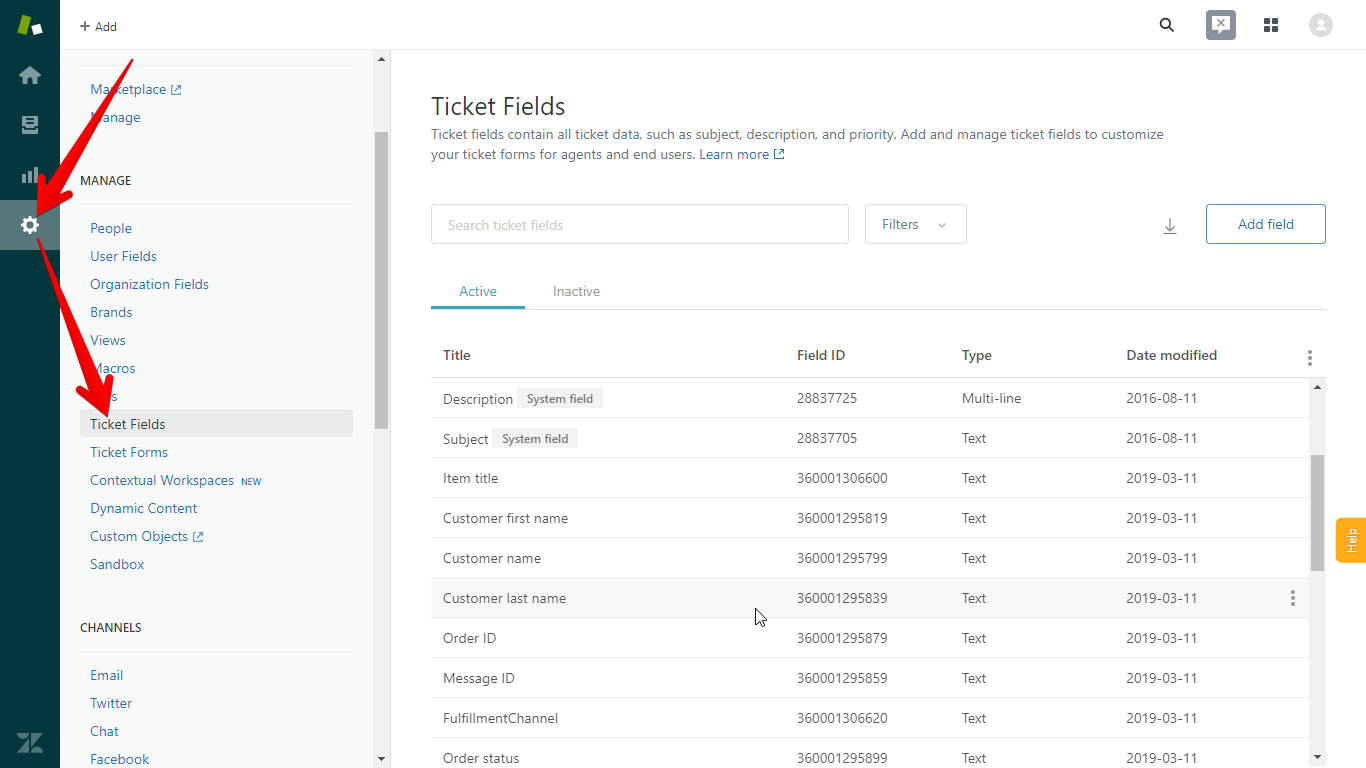 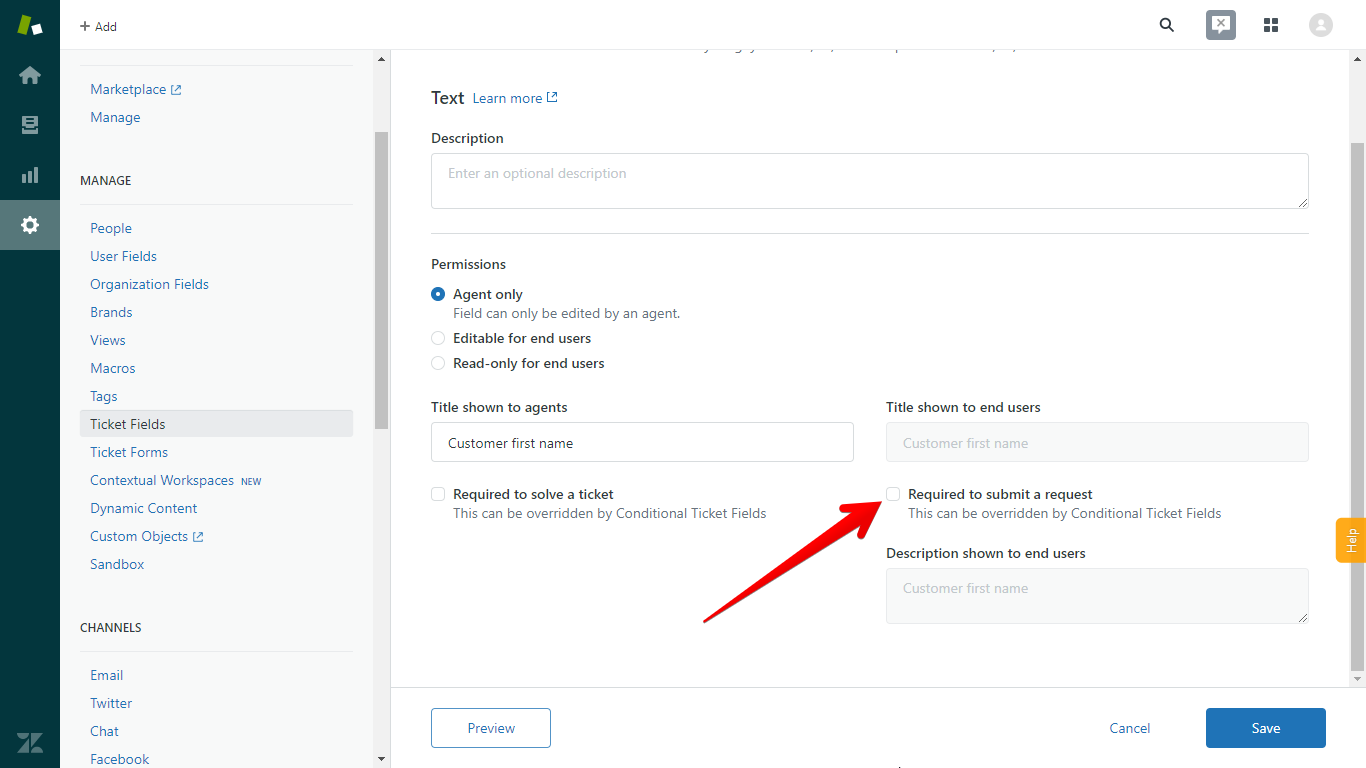 If both of the above are true, use setup B1. If you have “Anybody can submit tickets” disabled, or if any of your custom fields have “Required to submit a request” checked, then use setup B2 instead.

Then add the following ANY conditions: 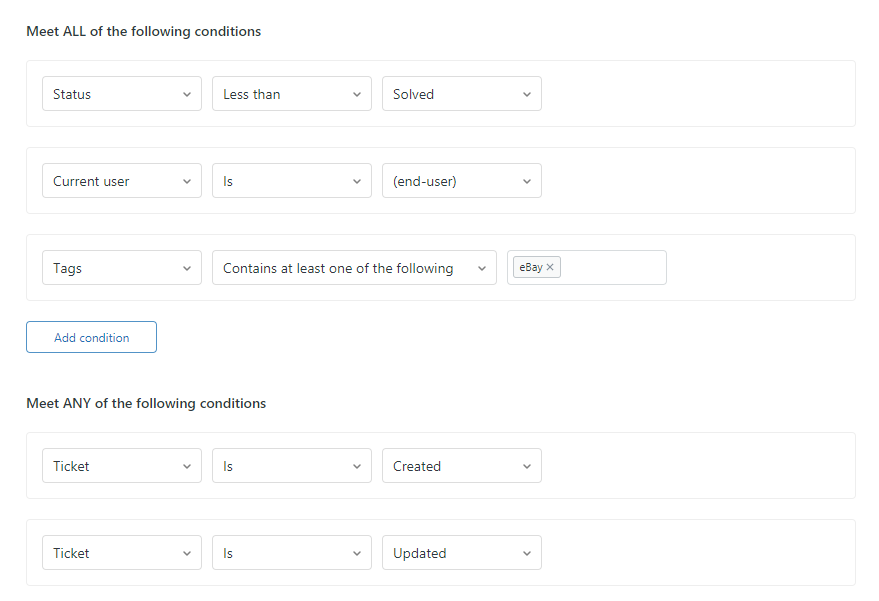 Then scroll all the way down and click “Create.”

You’ll need to create two autoresponder triggers. The one you’ve already begun creating will be used to answer the first message in each new ticket. The second will answer any follow-up messages. 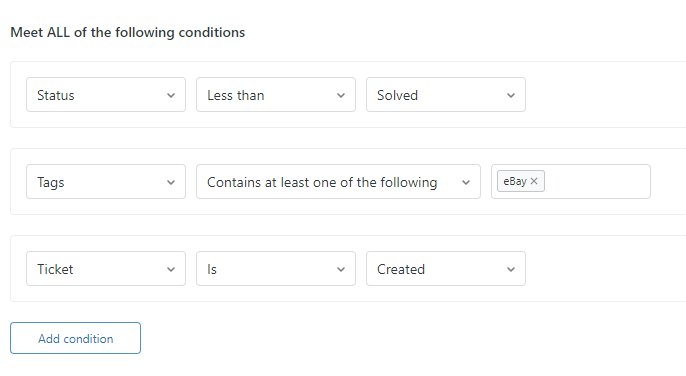 Then scroll all the way down and click “Create.”

Next, clone the autoresponder. This clone will be used to answer messages you receive on existing tickets.

Give the clone a new name, like “eBay Follow-Up Autoresponder.” Then change the ALL conditions to the following: 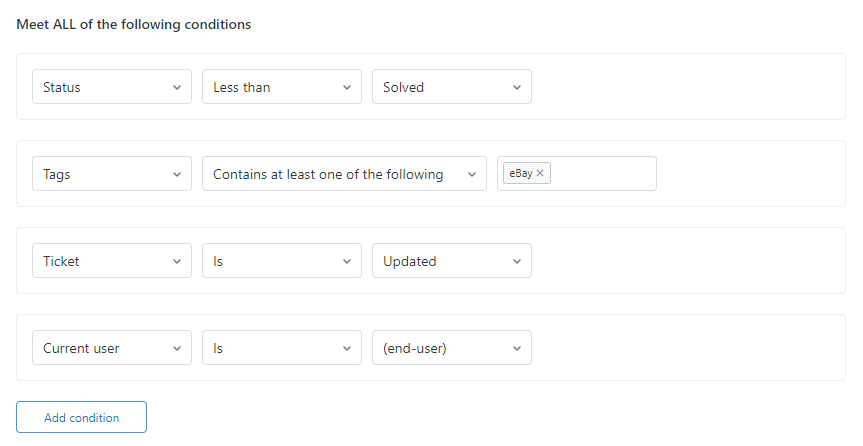 You can edit the message if you want. Once you’re finished, scroll down and click “Create.”

You can customize any autoresponder trigger further with added conditions. For example, if you have Zendesk Professional or Enterprise, you might want to add the following ALL condition:

Within business hours? | Is | No

That way, the trigger will only fire when nobody is available to answer tickets.

Additional Autoresponders for Your Other Accounts

Creating another autoresponder takes much less work. Just clone the trigger you’ve already created, then edit the clone. (Or, if you're using setup B2, clone and edit both triggers you created earlier.)

Congratulations on setting up your Walmart/eBay/Amazon autoresponders! For more time-saving options, see our other advanced setup tutorials. Or, if you have any questions or get stuck, just contact us and we’ll be happy to help!

Can't find what you're looking for?

Get Support
We're here to help!
Ask Anything
How to Use Zendesk as an eBay/Walmart/Amazon Autoresponder