Which Helpdesk Should I Use with ChannelReply?

ChannelReply lets you support Amazon, eBay, Shopify and Walmart customers from your helpdesk. But what if you don’t have a helpdesk? Which is better for your ecommerce business—Zendesk, Freshdesk, Help Scout, Gorgias or Re:amaze?

Each has clear advantages over the others. The ChannelReply integration also works differently with each one. We’ll cover the key variations here so you can choose the best fit for your business. 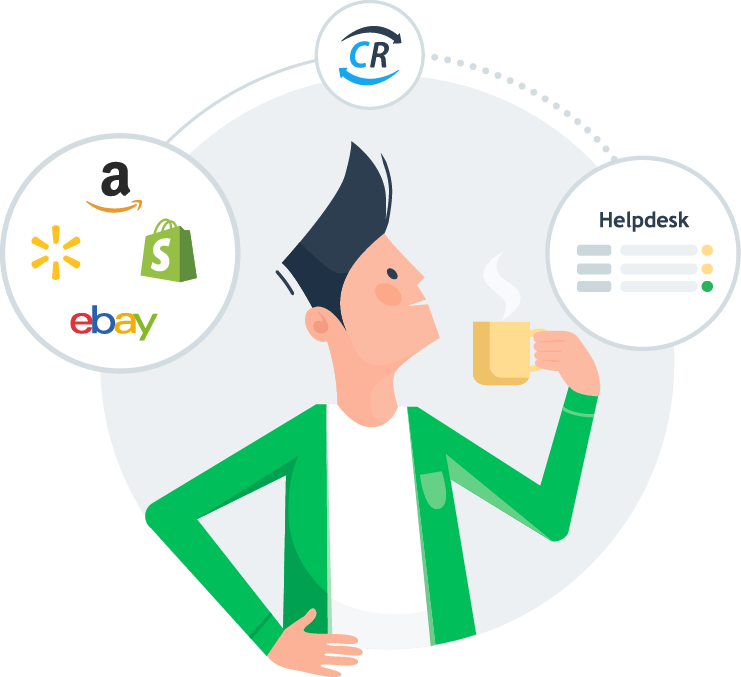 All supported helpdesks will make your life a lot easier!

So, how are they different? 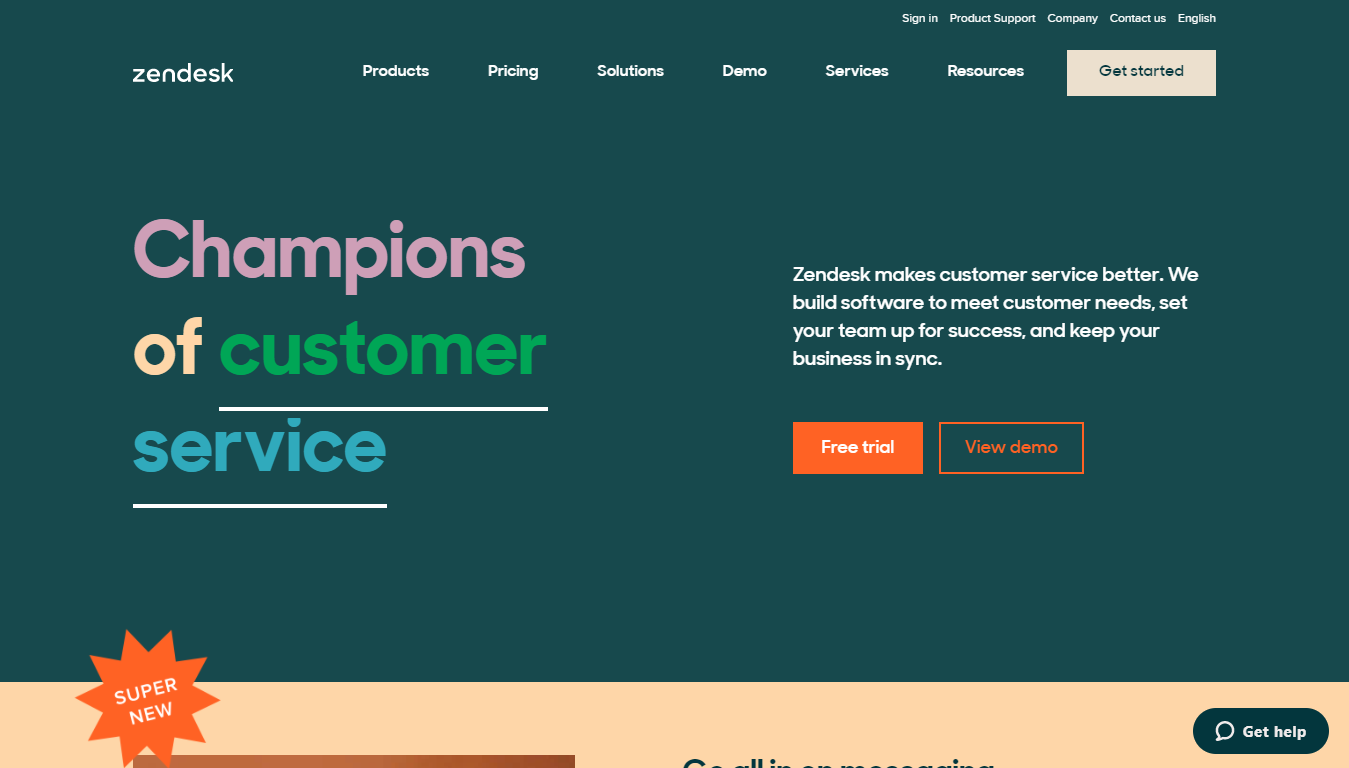 Zendesk was the first helpdesk we ever supported and is our most popular integration. As such, we’ve built every ChannelReply feature to work with Zendesk. It is incredibly flexible, meeting the needs of businesses of every size in all industries. Read more. 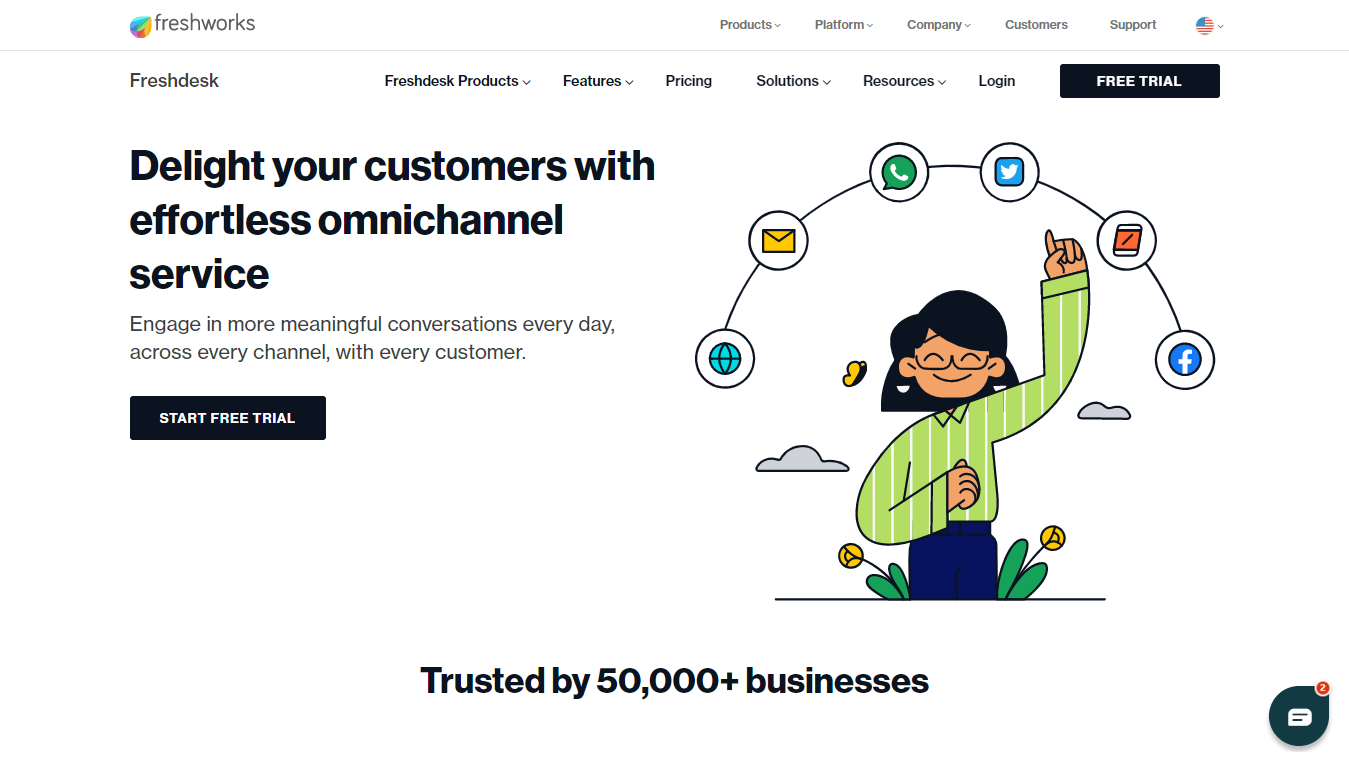 Freshdesk has features and flexibility similar to Zendesk’s at a more affordable price range. The integration has a few drawbacks, displaying fake email addresses for marketplace users and a small app interface. However, Freshdesk can do more with eBay, Amazon and Walmart data than any other helpdesk. Read more. 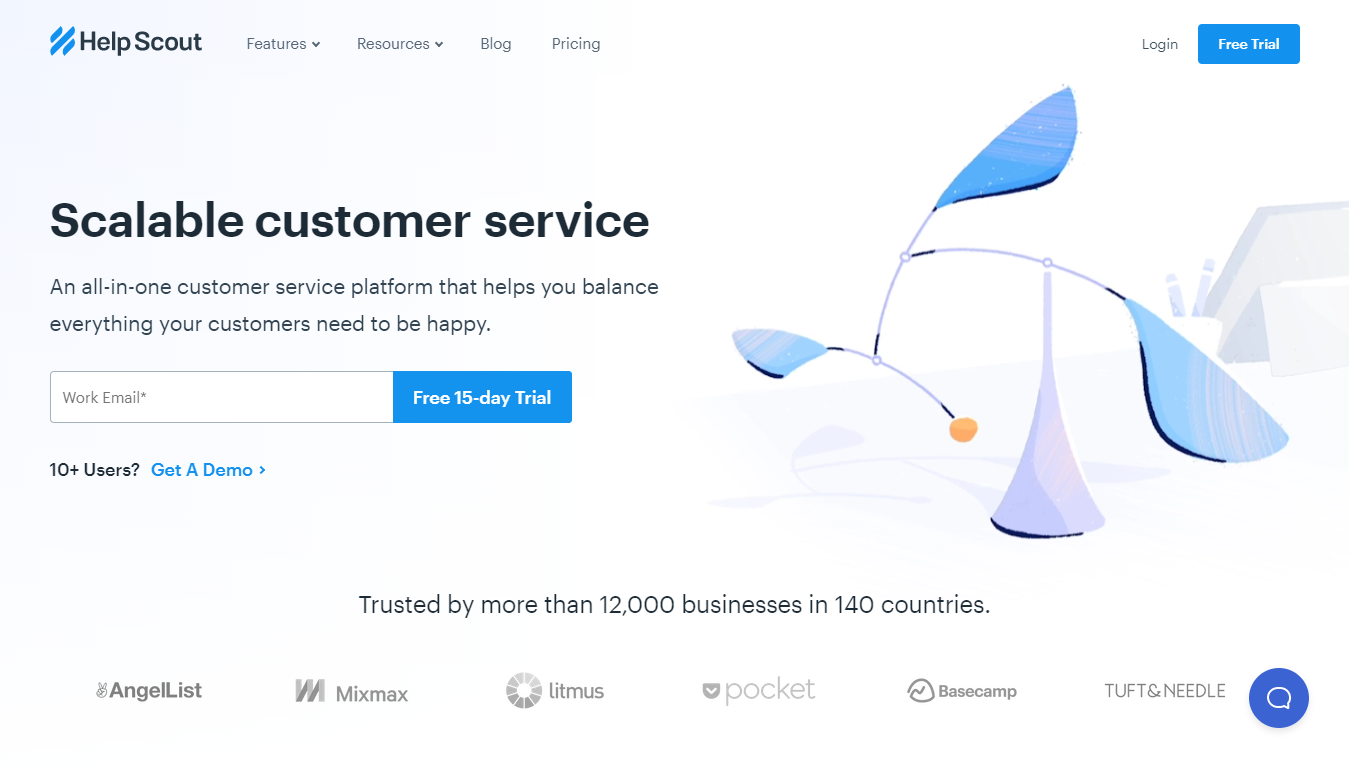 Help Scout is often the most affordable choice when you need advanced features like HIPAA compliance or smart self-help. It’s also brilliantly designed for ease of use—if you want zero tech headaches, Help Scout is the way to go! Just note that some ChannelReply features are not supported. Read more. 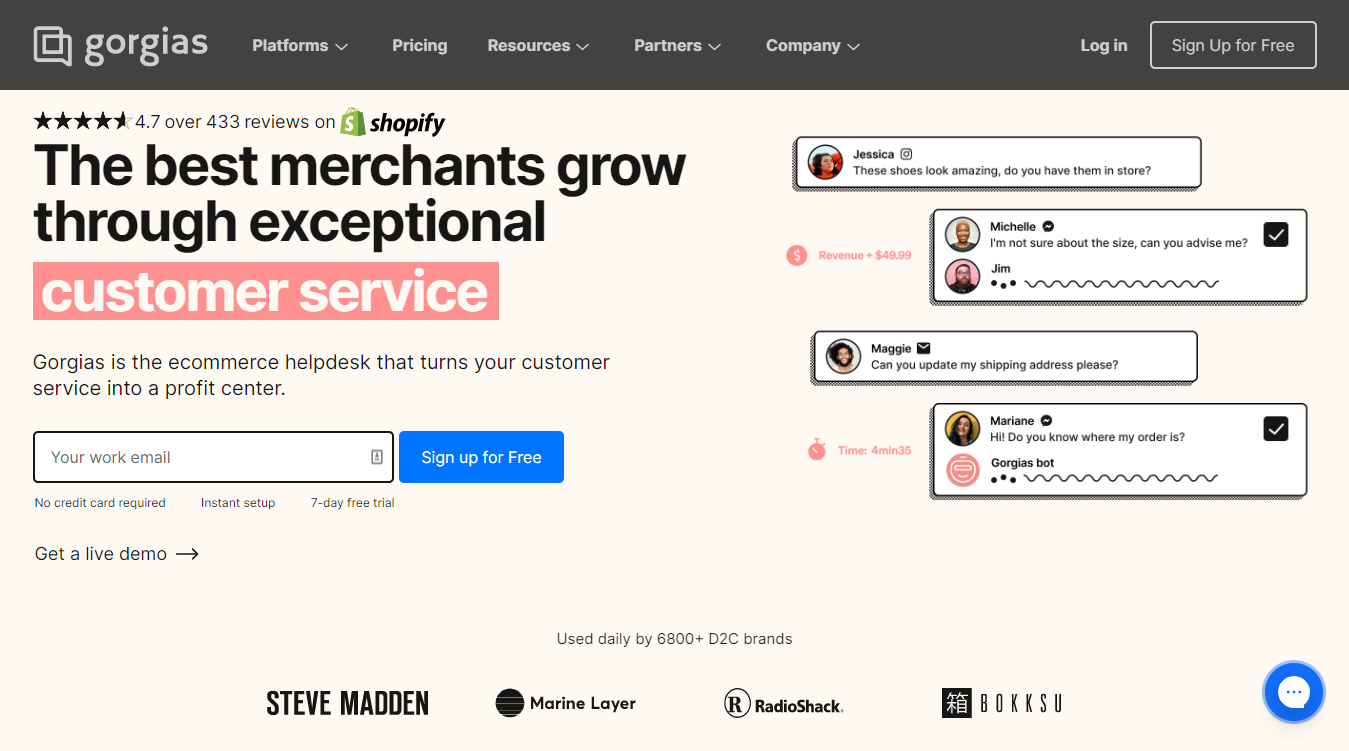 Gorgias knocks Shopify, Magento and BigCommerce support out of the park, building right into your store. Their native Shopify integration is so powerful that we skipped connecting Shopify to Gorgias—there's no way we could do it better than them!

All Gorgias plans include unlimited users and most Gorgias features, so they aren’t cheap. The Amazon, eBay and Walmart integrations are pretty basic except when it comes to macros, where Gorgias beats every other helpdesk we support. Read more.

Re:amaze can do almost anything and supports all ChannelReply features. Like Freshdesk, it has the drawback of displaying fake email addresses for marketplace customers, but it offsets this by having the absolute best mobile app for eBay, Amazon and Walmart support. Re:amaze also lives up to its name by developing new features at light speed! Read more. 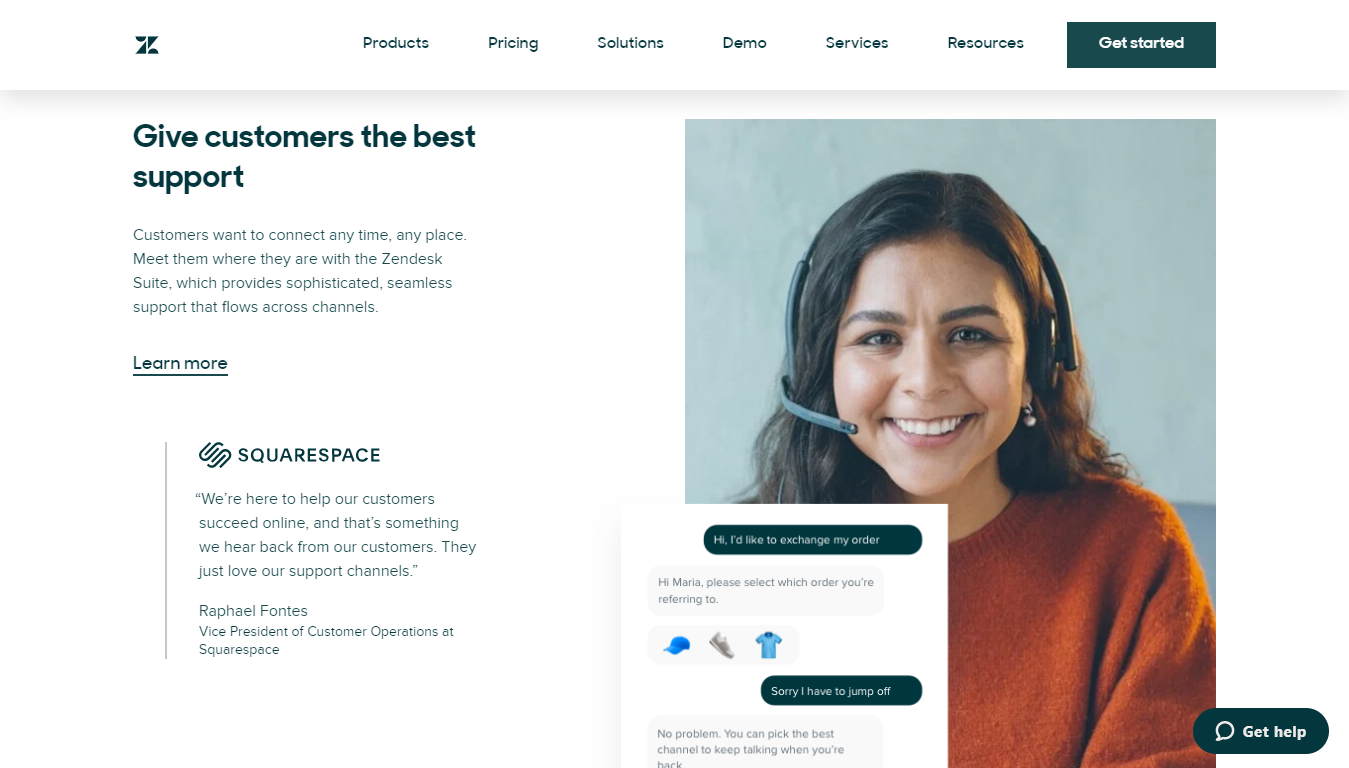 Some Advantages of Zendesk

What’s One of Zendesk’s Drawbacks?

What Are Some of the Top Reasons to Use Zendesk with ChannelReply? 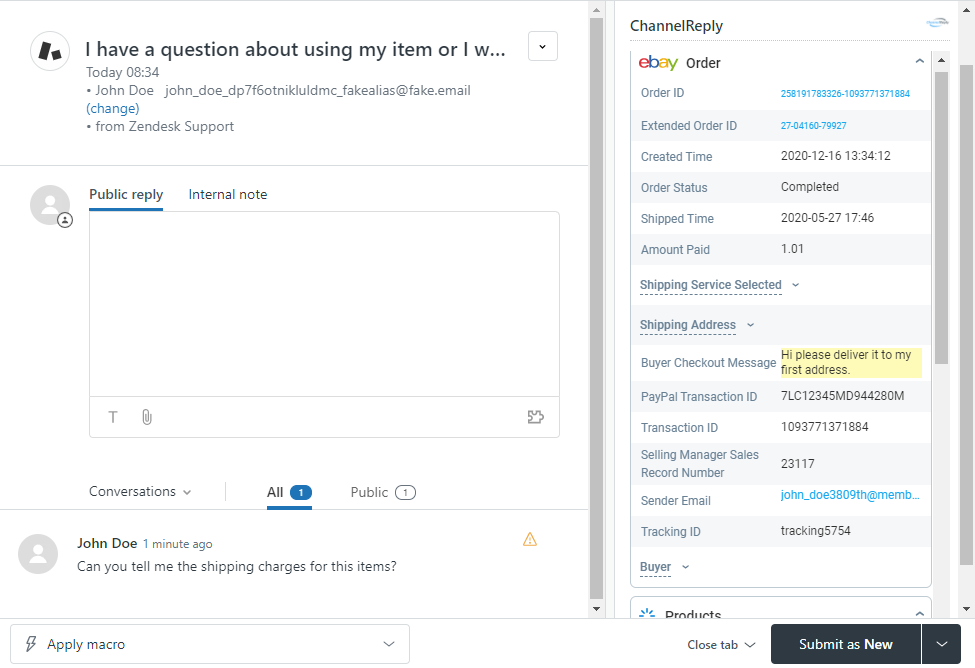 An eBay ticket in Zendesk with the ChannelReply app on the right.

Zendesk was the first helpdesk we integrated with eBay and Amazon, and it supports just about every ChannelReply feature. Here are a few things you can do with ChannelReply + Zendesk:

What Are the Limitations of the Zendesk Integration?

The biggest drawback is that data from ChannelReply cannot be used easily in Zendesk triggers and automations. For example, there’s no built-in option to build a trigger based on what item the customer purchased or how much they spent.

That’s not to say it would be impossible. We cover workarounds in “Everything You Can Do with ChannelReply in Zendesk,” under the heading “Custom Fields in Business Rules.”

Another issue is that Zendesk's mobile app leaves something to be desired. In all our tests, we have not been able to get ChannelReply data to appear in their mobile app. The ChannelReply app is not available, and while our custom fields will appear, they will not populate with data.

Are There Any Other Ways ChannelReply Works Differently in Zendesk?

If you close a ticket in Zendesk, it cannot be updated. This means new messages from that customer will open a new ticket rather than updating the old one. The new ticket is called a follow-up, and all follow-ups are linked to their related tickets, making it easy to review old tickets as needed.

Should I Choose Zendesk? 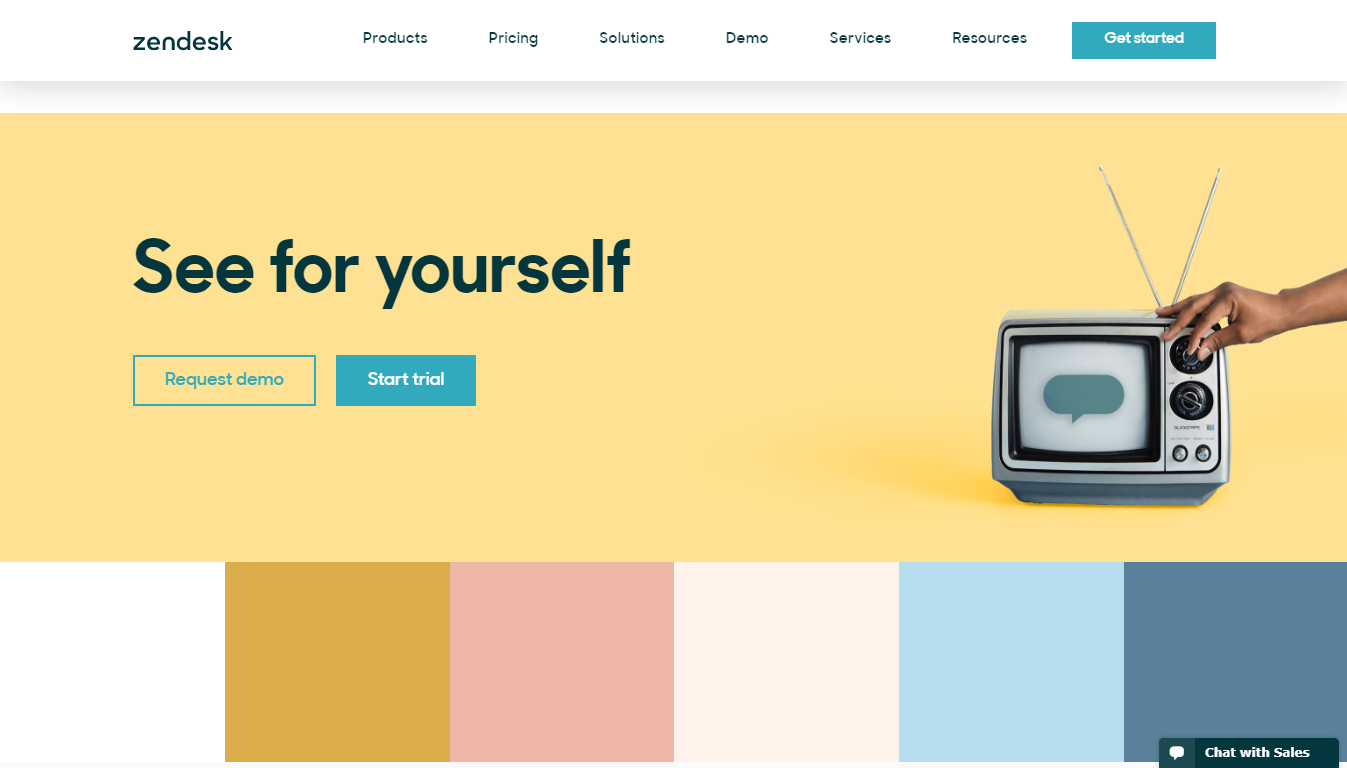 You’ll rarely hear the words “Zendesk can’t do that.” If power, scalability, and organization are top concerns, go with Zendesk.

What Zendesk Plan Do I Need to Use ChannelReply?

ChannelReply is compatible with Zendesk Support Team or better. Visit their pricing page for plan details.

Some Advantages of Freshdesk

What’s One of Freshdesk’s Drawbacks?

What Are Some of the Top Reasons to Use Freshdesk with ChannelReply? 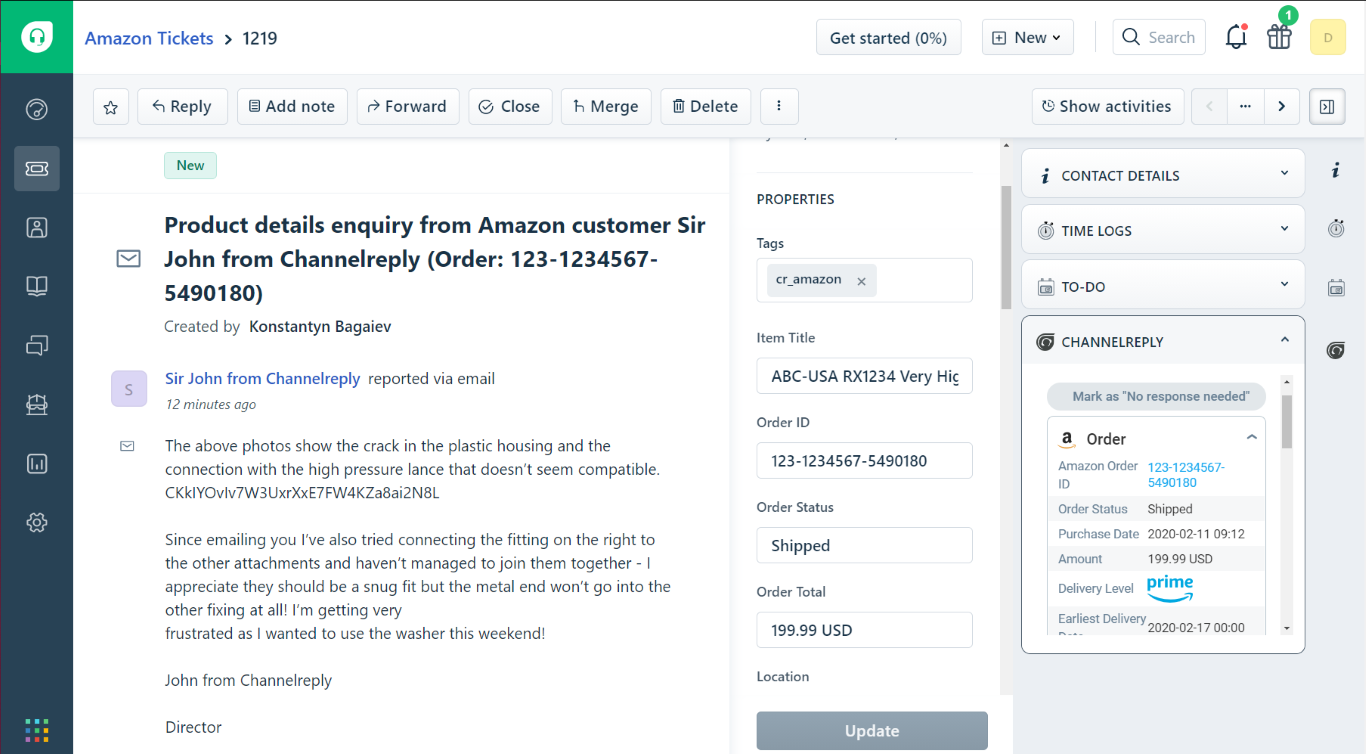 The ChannelReply app on an Amazon ticket in Freshdesk.

Freshdesk lets you do more with eBay, Walmart and Amazon data than any other helpdesk.

What Are the Limitations of the Freshdesk Integration?

The biggest drawback of using Freshdesk is that apps like ChannelReply are small. This means it can take some scrolling to read through all the customer and order info we provide.

Data from eBay, Walmart, Shopify and Amazon is not searchable in Freshdesk.

Messages from marketplace customers will appear with fake email addresses. You would see something ending with @channelreply.email rather than, for example, an @members.ebay address. However, the real address will be available on their Freshdesk customer profile and will therefore be searchable. You can also collect the marketplace email addresses for use in rules with ChannelReply’s custom fields.

While the Freshdesk mobile app will allow you to view custom field data, it will not display the ChannelReply app. This means that on mobile, some data will be unavailable and you will not be able to take any actions (including simple ones like marking Amazon messages as no response needed).

Should I Choose Freshdesk?

We often recommend Freshdesk when customers ask for the most affordable option. It’s also the best choice for sellers who love using Amazon, eBay, Shopify and Walmart data in both canned responses and automations.

What Freshdesk Plan Do I Need to Use ChannelReply?

ChannelReply is compatible with Freshdesk's Growth plan or better. Visit their pricing page for details.

Some Advantages of Help Scout

What’s One of Help Scout’s Drawbacks?

What Are Some of the Top Reasons to Use Help Scout with ChannelReply? 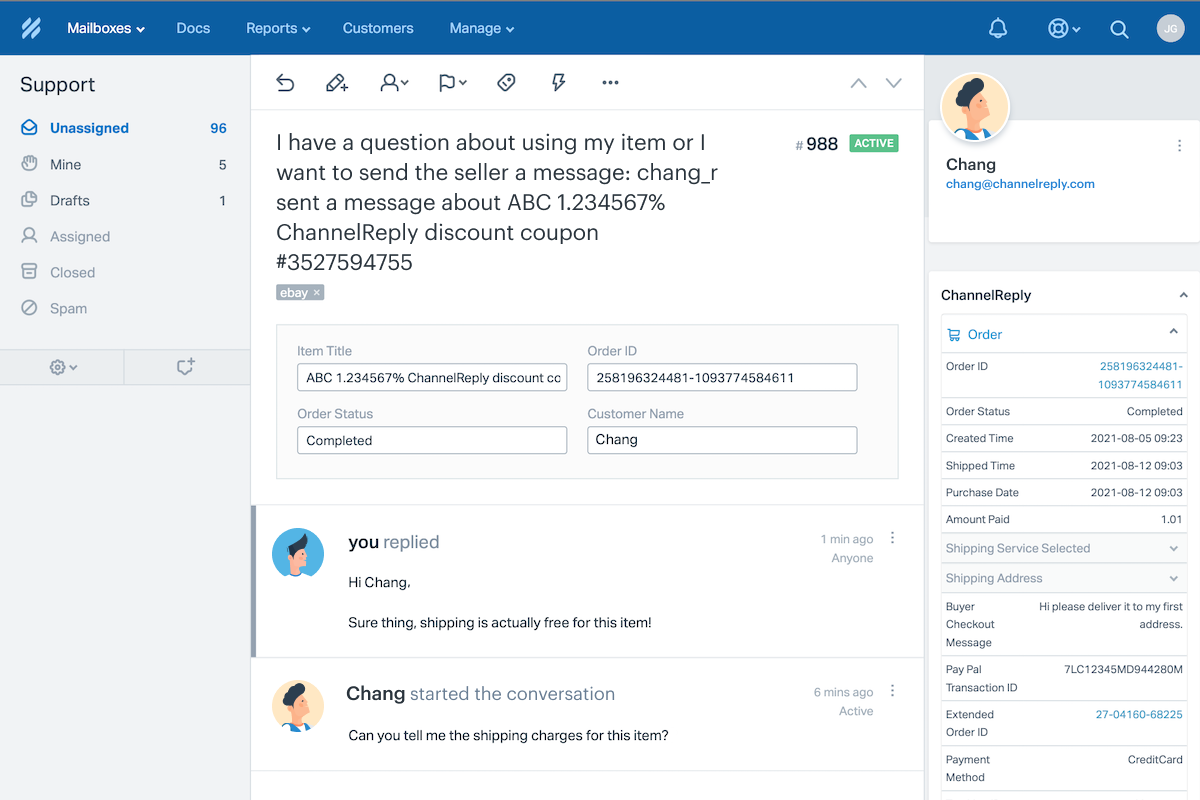 An eBay ticket in Help Scout, with the ChannelReply app on the right.

What Are the Limitations of the Help Scout Integration?

Data from Amazon, eBay, Shopify and Walmart cannot be used as placeholders in Help Scout’s Saved Replies. You’ll need to manually type in details like the name of the item the customer ordered when replying.

Help Scout only supports one-click actions in apps like ChannelReply. As a result, we only provide two actions in the Help Scout app at this time:

Help Scout's mobile app is comparable to Freshdesk's. You can view custom fields, but you cannot view the ChannelReply app or take app actions on mobile. It's also worth noting that you need a higher-level Help Scout plan (Plus or better) to use custom fields.

Should I Choose Help Scout?

Help Scout is fantastic for anyone who wants a clean and simple way to answer customer messages. If you do a lot of your business on your own website, their built-in Docs help centers and Beacon chat / self-help app deliver incredible bang for the buck.

What Help Scout Plan Do I Need to Use ChannelReply?

ChannelReply is compatible with Help Scout Standard or better. To use our custom fields, you'll need Plus or better. Visit their pricing page for plan details.

Some Advantages of Gorgias

What’s One of Gorgias’s Drawbacks?

What Are Some of the Top Reasons to Use Gorgias with ChannelReply?

The ChannelReply app on an Amazon ticket in Gorgias.

Gorgias macros can use absolutely any piece of data from any third-party app. That includes ChannelReply.

What Are the Limitations of the Gorgias Integration?

We do not have a documented autoresponder system for Gorgias. Previously, it was impossible to build a Gorgias autoresponder that was compatible with API messages (such as those delivered by ChannelReply). However, we've run some recent tests that suggest we may be able to find a solution in the near future.

eBay, Amazon and Walmart data is not searchable in Gorgias. It is also not currently usable in rules.

eBay Resolution Center inquiries, cases, returns and cancellations cannot be managed inside Gorgias. Walmart actions like acknowledging orders are also unavailable. However, the Gorgias team has told us that improvements are on the way that will allow us to support these actions sometime in the future.

Should I Choose Gorgias?

What Gorgias Plan Do I Need to Use ChannelReply?

All Gorgias plans are compatible with ChannelReply. Visit their pricing page for plan details. 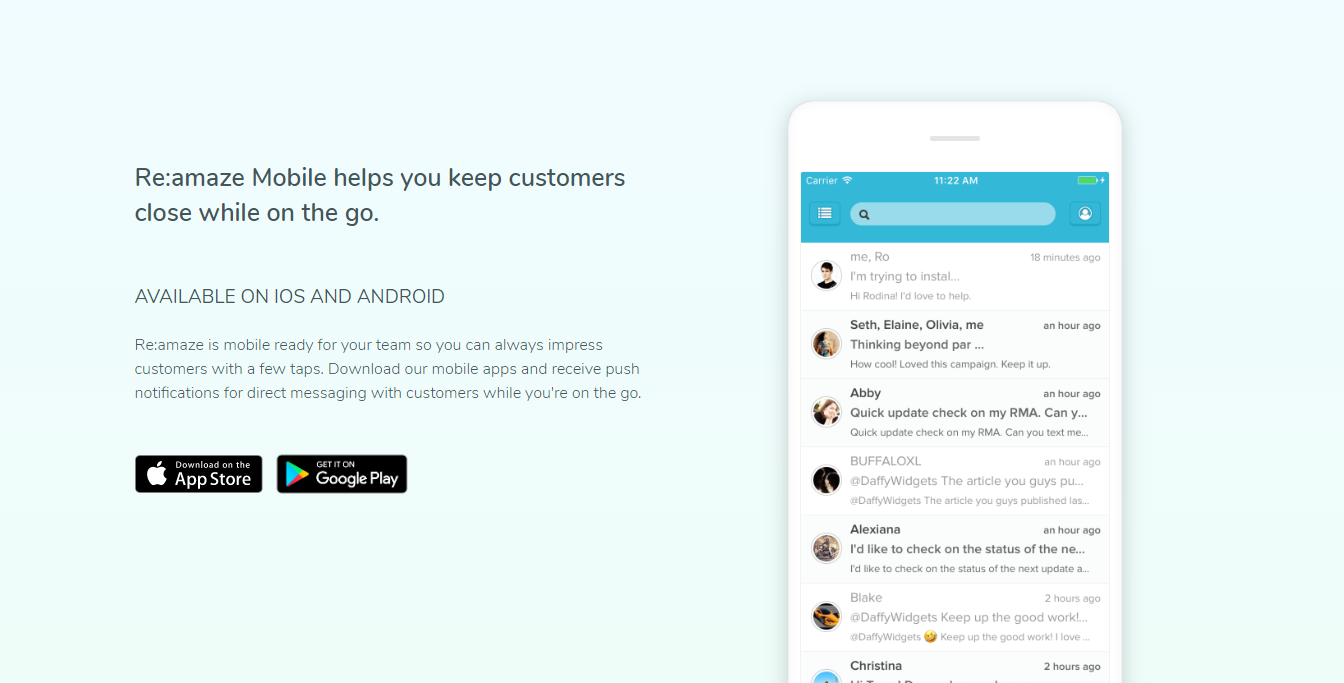 Some Advantages of Re:amaze

What’s One of Re:amaze’s Drawbacks?

By default, marketplace data is not searchable in Re:amaze. The only workaround available right now (using custom fields) can quickly cause your tickets to become cluttered.

What Are Some of the Top Reasons to Use Re:amaze with ChannelReply? 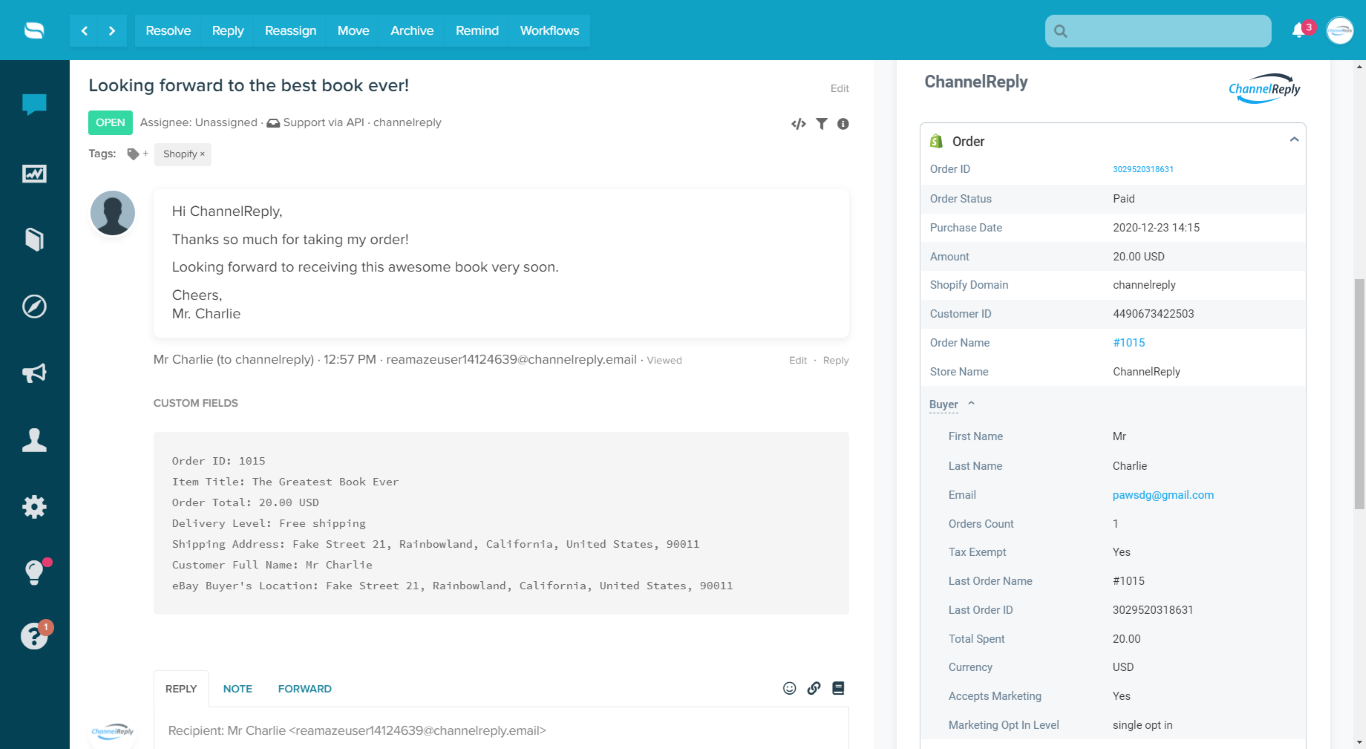 Above: A Shopify ticket in Re:amaze on a desktop browser. Below: The ChannelReply app displaying data for the same ticket inside the Re:amaze mobile app. 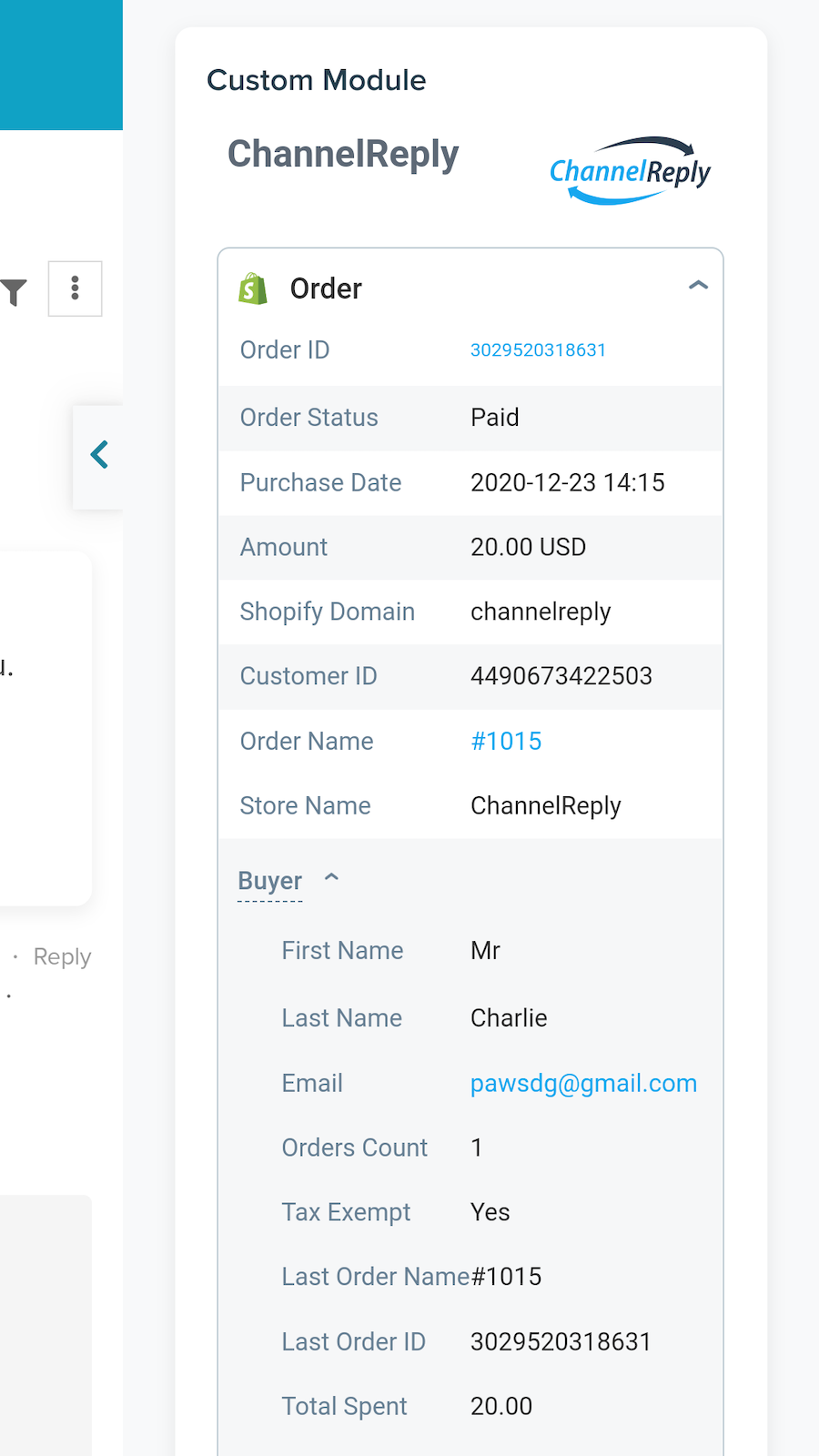 Re:amaze is the only helpdesk that is 100% compatible with ChannelReply on mobile devices. Their app-within-an-app feature allows you to easily check your buyer and order data, then switch back to answering the message.

What Are the Limitations of the Re:amaze Integration?

Messages from marketplace customers will appear with fake email addresses. You would see something ending with @channelreply.email rather than, for example, an @marketplace.amazon address. While the real address will be available in their Re:amaze customer attributes, it will not be searchable by default. You can collect the marketplace email addresses for use in search and rules with ChannelReply’s custom fields.

Data from eBay, Walmart, Shopify and Amazon is not searchable in Re:amaze unless you set up custom fields.

Custom fields can only be updated in Re:amaze whenever a new message is delivered. In the other platforms, they are updated every time the ChannelReply app loads in the sidebar. This means Re:amaze may occasionally show outdated data in custom fields, but the latest info is always available in the app.

Should I Choose Re:amaze?

Re:amaze’s well-designed interface and advanced options make it one of our most frequently recommended helpdesks. As the only one compatible with all ChannelReply features across all devices, it's also our #1 choice for mobile customer service.

What Re:amaze Plan Do I Need to Use ChannelReply?

All Re:amaze plans are compatible with ChannelReply. Visit their pricing page for plan details.

I’m Still Not Sure Which One I Should Use—Help!

We’re here to answer your questions! Contact us and tell us what features are most important to you. We’ll gladly help you find the helpdesk that best meets your needs.

Can't find what you're looking for?

Get Support
We're here to help!
Ask Anything
Which Helpdesk Is Best for Ecommerce Support?